These past few weeks I have had the wonderful opportunity to study Lysa TerKeurst’s Finding I AM. It’s a study that dives deep into Jesus’ I am statements and how they apply to our lives today.

Last week, I came across a familiar passage but in so many ways, it felt like I was reading it for the very first time. It’s the story of how Jesus healed the blind man and I just wanted to take a few moments and show you what stood out to me.

As he went along, he saw a man blind from birth. 2 His disciples asked him, “Rabbi, who sinned, this man or his parents, that he was born blind?”

Immediately my heart goes out to this poor man who had no control over his blindness and it’s easy to point out the lack of sympathy in the disciple’s question of who had sinned for him to be that way. But just like with texts and letters, it is hard to know what kind of tone they had and it was a common belief that those who had physical ailments had them do to unconfessed sin.

Not only that, if I’m being completely honest how often do I try to judge people’s sins according the weight of their actions? It isn’t my place and only God is the righteous judge. Jesus said it best in verses 3.

Neither this man nor his parents sinned,” said Jesus, “but this happened so that the works of God might be displayed in him.

This verse is one of my favorites for many reasons but one example stands out above all of the others. A little over a year ago, I had applied for a job that seemed to be the perfect for me and the only thing I needed to do was take the GRE and get a passing score. I was 9 points shy and was devastated. I knew I needed to talk to someone and the only person at the time that I could think of was my pastor’s wife. To this day, I ‘m surprised she could understand anything that I was saying because I was so choked up but after listening to my cries she told me this verse and it was like a balm for my soul. I remember saying, “God, although I am hurting and  I don’t understand what you are doing  right now I trust you. May your work be displayed in me.”

A couple of weeks later, He came through in a mighty way and blessed me with a career that is the perfect fit for me and allows me to be a light for him in more ways than I can imagine. He is faithful y’all!

4 As long as it is day, we must do the works of him who sent me. Night is coming, when no one can work. 5 While I am in the world, I am the light of the world.”

Did you catch that I am statement? The light of the world. Oh Lord, how much we need your light in this dark world!

At this point in the story Jesus goes on to heal the blind man and this is where I always assumed that his story ended…nope! The rest of John 9 is dedicated to this unnamed man whom Jesus used as an example for all of us.

13 They brought to the Pharisees the man who had been blind. 14 Now the day on which Jesus had made the mud and opened the man’s eyes was a Sabbath. 15 Therefore the Pharisees also asked him how he had received his sight. “He put mud on my eyes,” the man replied, “and I washed, and now I see.”

16 Some of the Pharisees said, “ This man is not from God, for he does not keep the Sabbath.”

But others asked, “How can a sinner perform such signs?” So they were divided.

The Pharisees did not know what to make of this and held onto their traditions so tightly that they missed the love of God that was right in front of them. The simple, yet profound statement of the man saying “I washed and now I see” automatically brings Amazing Grace to my mind. Since they were torn about what to do they asked him a very personal question.

17 Then they turned again to the blind man, “What have you to say about him? It was your eyes he opened.”

The man replied, “He is a prophet.”

Despite that this man had had a personal interaction with Jesus, the Pharisees still refused to accept Him.  They didn’t stop there, however, they brought his parents in!

18 They still did not believe that he had been blind and had received his sight until they sent for the man’s parents. 19 “Is this your son?” they asked. “Is this the one you say was born blind? How is it that now he can see?”

20 “We know he is our son,” the parents answered, “and we know he was born blind. 21 But how he can see now, or who opened his eyes, we don’t know. Ask him. He is of age; he will speak for himself.” 22 His parents said this because they were afraid of the Jewish leaders, who already had decided that anyone who acknowledged that Jesus was the Messiah would be put out of the synagogue. 23 That was why his parents said, “He is of age; ask him.”

Those last two verses just break my heart. They knew the risk of telling the truth would put their reputations and lives as they knew it at risk so they left it up to their son to hold his ground.

I don’t know about you, but when I’m faced with difficult situations I need people to stand up for me and encourage me to keep going. Can you imagine how lonely and scared this man must have felt? Let’s go on a little further.

24 A second time they summoned the man who had been blind. “Give glory to God by telling the truth,” they said. “We know this man is a sinner.”

Verse 25 just makes me want to jump for joy! Isn’t that like all of us who are children of God?! Sometimes we are at a loss for words and we get to a point where we just say, “I don’t know how but God, and only God came through!”

He was even bold enough to tell the hard-hearted Pharisees that he had explained it to them yet they would not listen.

You see, God often speaks to our hearts before we see Him move with our eyes. Since the beginning of time, he has each created us with a longing that only He can satisfy and until we fully surrender to Him, we walk around blindly searching for temporary things that can never fill an eternal need.

Listen to what he goes on to tell the Pharisee’s after they said that they were disciples of Moses and that they didn’t know where Jesus had come from starting in verse 30.

The man answered, “Now that is remarkable! You don’t know where he comes from, yet he opened my eyes. 31 We know that God does not listen to sinners. He listens to the godly person who does his will.32 Nobody has ever heard of opening the eyes of a man born blind. 33 If this man were not from God, he could do nothing.”

Again, his words are simple yet at the same time profound because they come from a genuine heart. He was literally being changed from the inside out before their very eyes (does that count as a pun?).

However, instead of listening and taking his testimony to heart they hurled an insult at him and through him out.

But can you guess who was waiting for him outside? That’s right! Jesus! Let’s see what happens next.

35 Jesus heard that they had thrown him out, and when he found him, he said, “Do you believe in the Son of Man?”

Jesus wasn’t just interested in healing him physically. His main desire was to heal Him spiritually. The same is true for us!

At this point it was clear that this man was ready to take that step of faith and fully trust in Jesus. He had personally seen what He had done in his life and now made the decision to trust Him wholeheartedly.

37 Jesus said, “You have now seen him; in fact, he is the one speaking with you.”

Three simple words yet life-changing to say the least. Notice that he worshiped him too! May we never grow too accustomed to going through the motions that we forget to worship our Almighty Savior.

39 Jesus said,[a] “For judgment I have come into this world, so that the blind will see and those who see will become blind.”

I know that judgement is not a popular word, especially these days. However, it is a given whether we accept it or not. Jesus came for all (for the blind to see) but if we choose not accept him those who see will become blind to His love and grace.

40 Some Pharisees who were with him heard him say this and asked, “What? Are we blind too?”

Have you ever noticed that the beginning of this passage starts with the disciples asking a question based on the beliefs that had been passed down to them and it ends with a Pharisee asking a question about Jesus? I wonder if some of those Pharisees were starting to feel a prompting in their heart when they asked that question.

41 Jesus said, “If you were blind, you would not be guilty of sin; but now that you claim you can see, your guilt remains.

The truth is, we are all sinners who sin daily and it’s only through Jesus that we have forgiveness. I pray that our hearts are enlightened today and everyday by the light of the world that loves us so much that He refuses to let us stay in the dark. 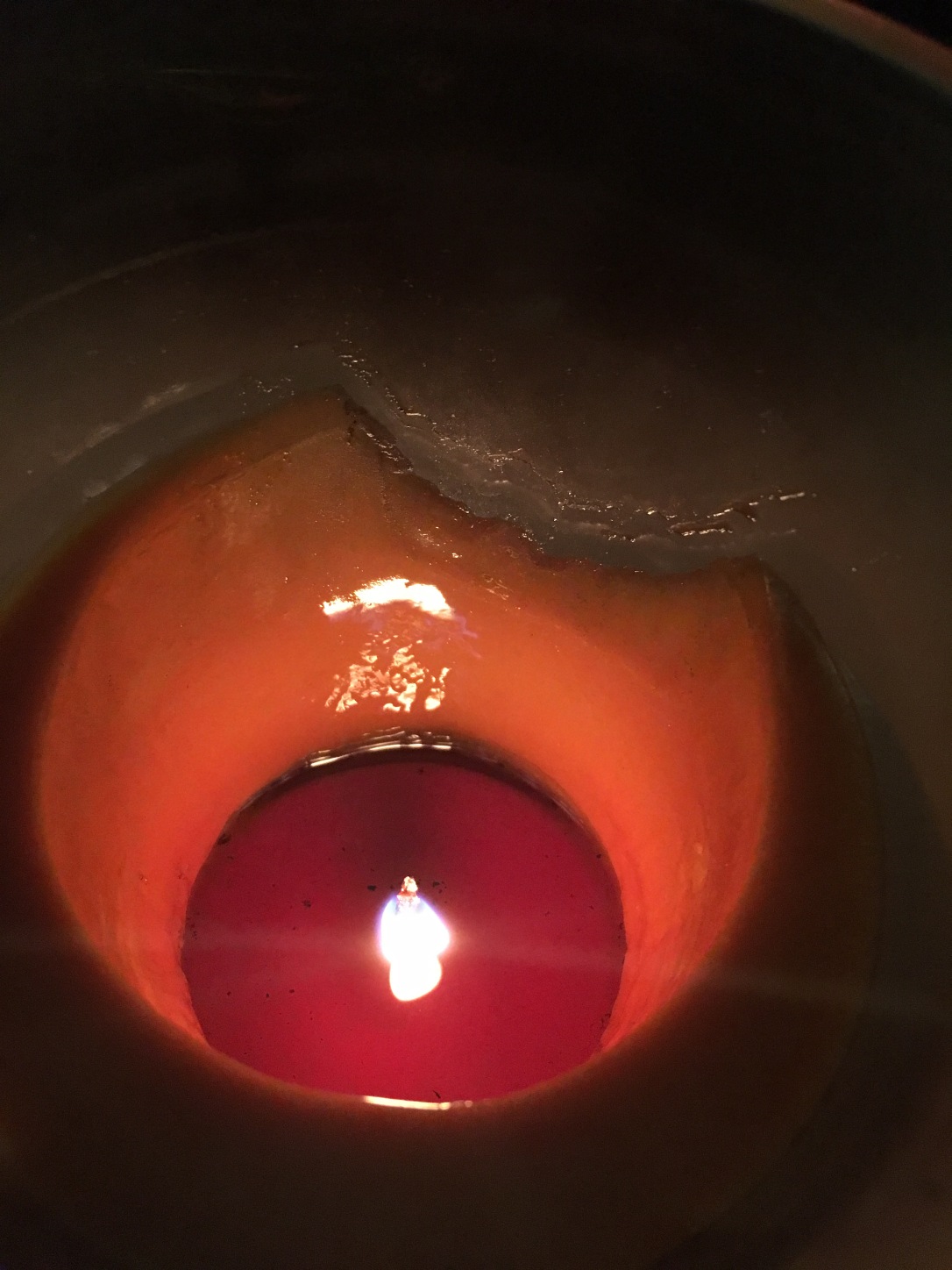 Hey there! Thanks for visiting my blog! A little about me, I'm just your typical Southern girl that loves to write about anything that I find inspiring with the hopes of inspiring others along the way. My Lord and Savior Jesus Christ is the most important thing to me and it is through him I find my inspiration and my strength. I wouldn't be anywhere without my family and friends. I love my job but I also love writing and I'm starting this blog to see where it leads! View all posts by Jennifer Greathouse